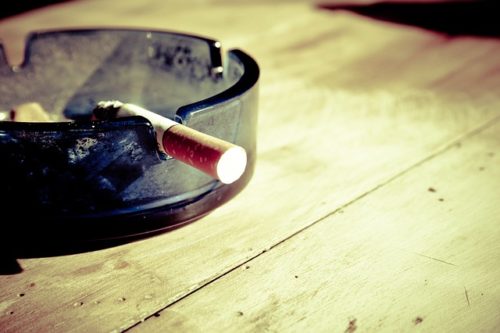 One of the many distinguishing factors between homo sapiens and the rest of the animal kingdom is the humanoid’s propensity to smoke substances of varying varieties. Whatever the reason – religious, cultural, pleasure, habit, image, addiction – it is a practice that has perpetuated for centuries. During the 20th century, however, the advancement of medical research unveiled the dangerous side-effects of this long-lasting custom. This led to a global trend of imposing restrictions on smokers and tobacco companies alike. Amongst these restrictions is the now accepted imposition of smoke-free zones (such as offices and public spaces) and the establishment of designated smoking areas outside of which smokers may not publicly indulge in their habit. These restrictions, coupled with the indisputable health risks associated with smoking, exposed a gap in the market; the search was on for a product that the health-conscious smoker, unwilling or unable to kick the habit, could safely use as a guilt-free alternative.

One of the main differences between cigarettes and e-cigarettes is that e-cigarettes do not contain tar. The other significant difference is that, unlike their tobacco-leafed counterpart, there is currently no legislation that expressly regulates e-cigarettes. And more specifically, there is currently no legislation that prohibits vaping in offices and public areas. This is not surprising, given that South Africa’s Tobacco Products Control Act was enacted in 1993, long before anyone could have anticipated the trend towards inhaling chemical alternatives as opposed to the traditional tobacco-burning ritual.

With the advent of Twisp and their counterparts, many a smoker, eager to escape the inconvenience of smoking zones, has made the switch to e-cigarettes, casually “lighting up” wherever they choose. When confronted by indignant non-smokers, the well-rehearsed rhetoric remains constant: the only by-product is water vapour; it’s not harmful; it’s not illegal; it doesn’t affect you – so stay out my business.

Naturally, it didn’t take long for health watchdogs to challenge these claims. And soon mainstream media became swamped with competing information: proponents claiming that e-cigarettes pose no ill-effects (conversely, they offer numerous advantages), juxtaposed against opponents who point to a widening body of research concluding that e-cigarettes are indeed harmful.

Whichever side of the fence you may be on, there are a few indisputable facts:

The world is grappling with this dilemma: are e-cigarettes a killer or a cure? While Switzerland and Singapore prohibit vaping in public spaces, the UK has embraced e-cigarettes as an aid to quit smoking. So who has called it correctly? And while people far cleverer than us plebs figure out the answer, what do we in South Africa do about vaping in offices and in public spaces?

Many concerned citizens have adopted the view that until proven otherwise, e-cigarettes should be treated as a health risk. The combination of outspoken opponents and considerate smokers has meant that public spaces have remained relatively safe from the plumes of e-cigarette smoke that invariably trails the serial vaper. But what about offices? When a frazzled employee charging down a deadline lights up their e-cigarette while seated at their desk, is there anything that the hapless non-smoking employee can do? Apart from shooting a tight-lipped glare across the corridor.

The answer to this dilemma lies in the company’s Smoking Policy. Although there may presently be no law restricting the use of e-cigarettes, there is nothing stopping an organisation from implementing its own policies and procedures to regulate vaping in the workplace. While e-cigarettes may be unregulated, vaping is also not a right, and accordingly organisations are entitled to implement their own policies and enforce a vaping prohibition in their work spaces. Simply by including e-cigarettes into their Smoking Policy, treating them as tobacco products on an equal footing with cigarettes, employers can regulate their employees’ usage of e-cigarettes. This applies equally to the restaurant environment and shopping centres, where restauranteurs and retailers may similarly implement and enforce a no-vaping rule on their patrons.

While we wait for South Africa to join a growing number of countries that have regulated and prohibited the use of e-cigarettes in work and public places, employers are urged to review and update their Smoking Policies. And just a heads-up for the protesting vapers out there: word on the street is that it’s only a matter of time before e-cigarettes join their cancer-causing cousins by being statutorily relegated to the smoking zone.