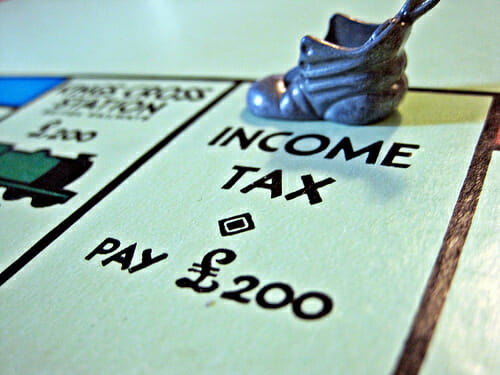 Death and taxes. Often said to be the only two certainties in life. If you’re a provisional taxpayer then at this time of year you may start questioning which is the more preferable option. With the provisional taxpayers’ tax return deadline looming you may well be contemplating an empty bank account and a mountain of bills, wondering what exhorbitant sum of money the taxman will be squeezing you for this time. [Sidenote: the deadline for provisional taxpayers to submit their tax return is 29 January 2016.]

Now there was a time, not so long ago, when one would regularly encounter groups of provisional taxpayers who would argue vociferously that the taxman is not the enemy, and that paying tax is great. No… really… just hear me out for a minute. They actually had a good argument going here. Idealistic and utopian, perhaps. But good. Firstly, as the argument went, one can naturally presume that the more tax you pay, the more income you’re earning. So, the higher your tax bill, the more you’re earning, which is a good thing, right? You can’t really argue with that logic. The second part to this argument was a tad more altruistic – the assertion that the tax we pay goes to a heart-warmingly good cause. Hospitals. Education. Police. Roads. Followers of this logic would get a warm and fuzzy feeling when passing hospitals, witnessing workmen repairing potholes, seeing policemen racing off to fight crime, hearing about new schools being built. “Now that’s putting my money to good use,” they would think.

Sadly, those days seem to have passed. Even the most ardent of these altruistic idealists have gradually been silenced. Nkandla. R4billion jets. Jobs for cronies. Tender scandals. BEE-created billionaires. Travelgates. Blue-light bullies. Crime stats. Not to mention the tired trio of Eskom, SABC and SAA. Set against a landscape of under-resourced public hospitals, over-crowded schools, too few houses and too many potholes. The juxtaposition is apparent when you pass the scrawny unemployed matriculant begging on the street corner while hearing about the latest multi-million Rand bonus rewarding an inflated CEO for mismanaging yet another state-funded organisation. It should come as no surprise, then, that the days of the willing provisional taxpayer have long since passed.

Returning now to our distressed provisional taxpayer regarding a woeful bank account in the face of an exhorbitant tax bill. It becomes oh-so-tempting to switch the right brain into overdrive and employ some wonderfully creative ways to dodge the tax bill. If this is something you’re seriously considering, we have just one word for you: Don’t. Because there is, indeed, something worse that death and taxes. It’s called the Tax Audit. And when you’re dragged before the law on tax evasion charges, defiantly declaring that “If the president wants a new jet he’s not getting it with my money” is unfortunately not considered a good defence, no matter how large your supportive fan-base may be.

By all means, as a prudent provisional taxpayer you should explore every lawful avenue to ensure that you’re not over-paying tax. The ministerial bodyguards really don’t need that fourth bucket of KFC. And one less car in the unnecessarily bloated cavalcade along the N1 surely won’t be missed. But equally as important, the prudent provisional taxpayer should also take care not to under-pay tax. Because when our prez needs more security upgrades – he’s going to need a hangar for his jet, after all – you may find yourself fingered for a Tax Audit. So make sure that your documents are all in order and when the dreaded Tax Audit is sprung upon you, you will have nothing to fear. Lease Agreement? Check. Employment Agreements and payslips? Check. Customer agreements? Check. Supplier agreements and invoices? Check. The prudent provisional taxpayer wouldn’t blink when presented with SARS’ long list of documentary evidence that s/he may be required to produce to substantiate his/her tax return.

Indeed, it is our belief at Agreements Online that the prudent provisional taxpayer should run his or her business professionally, diligently, efficiently. Ethically, honestly, and honourably. It is often said that evil happens when good people do nothing. But what is worse is when the good give up and floor-cross. The pervasion of the “if we can’t beat ‘em, join ‘em” philosophy is arguably even more destructive than our government itself. So it’s up to the prudent provisional taxpayer to show ‘them’ how honest business is done. Utopian? Undoubtedly. Idealistic? Perhaps. But with enough honest businessmen and women there is hope yet for our country.

And if this principled argument doesn’t fly with you, then the Tax Audit argument should do the trick. It’s only a matter of time before you get caught in the net, if you haven’t already. So our advice is – let someone else pay for that hangar.